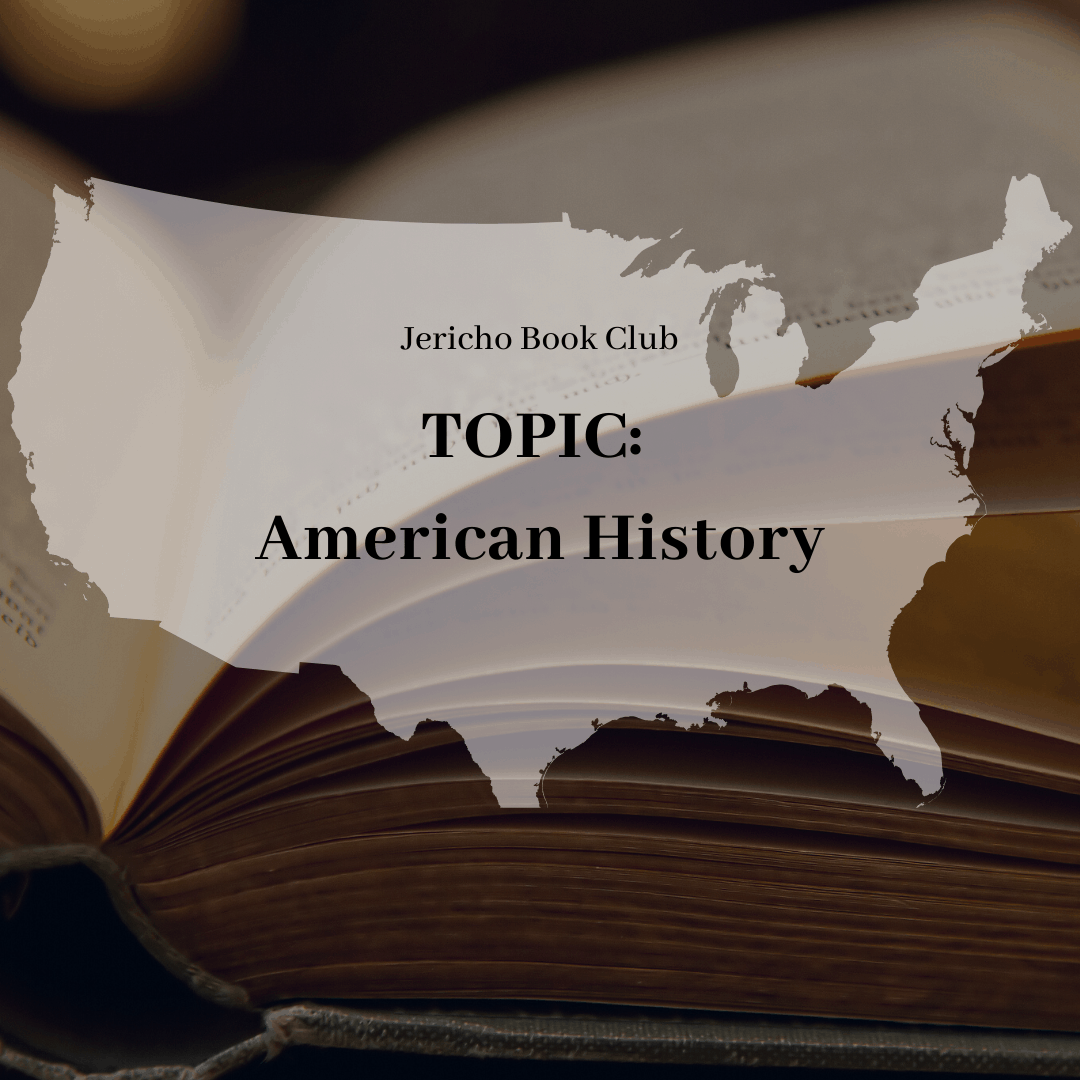 This week’s Jericho Book Club topic is- American History. The purpose of this reading list is to provide some books with an accurate description of historical events that are often not included in most American history textbooks. It is universally known that Americans are unaware of our own history, just take a look at these articles, Americans Know Little About Civic Affairs, by the Smithsonian; Alarming Number of U.S. Citizens Don’t Know Basic Facts About Their Own Country, from the Daily Mail; an American Bar Association Journal titled Flunking Civics: Why America’s Kids Know So Little; The Atlantic’s piece about how the lack of civics education shaped the 2016 election; and lastly the CNN’s recent report that Americans know practically nothing about our own Constitution.

Jericho Project understands that if we’re going to create real, sustainable change in this country, we must begin with a clear understanding of our own history — the good, the bad, and the unjust. Let’s start with these highly rated books to help us understand American history.

1. A People’s History of the United States by Howard Zinn

With a new introduction by Anthony Arnove, this edition of the classic national bestseller chronicles American history from the bottom up, throwing out the official narrative taught in schools—with its emphasis on great men in high places—to focus on the street, the home and the workplace.

Known for its lively, clear prose as well as its scholarly research, A People’s History of the United States is the only volume to tell America’s story from the point of view of—and in the words of—America’s women, factory workers, African-Americans, Native Americans, the working poor, and immigrant laborers. As historian Howard Zinn shows, many of our country’s greatest battles—the fights for a fair wage, an eight-hour workday, child-labor laws, health and safety standards, universal suffrage, women’s rights, racial equality—were carried out at the grassroots level, against bloody resistance.

Covering Christopher Columbus’s arrival through President Clinton’s first term, A People’s History of the United States features insightful analysis of the most important events in our history.

2. Lies My Teacher Told Me by James W. Loewen

A new edition of the national bestseller and American Book Award winner, with a new preface by the author

Since its first publication in 1995, Lies My Teacher Told Me has become one of the most important—and successful—history books of our time. Having sold nearly two million copies, the book also won an American Book Award and the Oliver Cromwell Cox Award for Distinguished Anti-Racist Scholarship and was heralded on the front page of the New York Times.

For this new edition, Loewen has added a new preface that shows how inadequate history courses in high school help produce adult Americans who think Donald Trump can solve their problems, and calls out academic historians for abandoning the concept of truth in a misguided effort to be “objective.”

What started out as a survey of the twelve leading American history textbooks has ended up being what the San Francisco Chronicle calls “an extremely convincing plea for truth in education.” In Lies My Teacher Told Me, James W. Loewen brings history alive in all its complexity and ambiguity. Beginning with pre-Columbian history and ranging over characters and events as diverse as Reconstruction, Helen Keller, the first Thanksgiving, the My Lai massacre, 9/11, and the Iraq War, Loewen offers an eye-opening critique of existing textbooks, and a wonderful retelling of American history as it should—and could—be taught to American students.

3. Killers of the Flower Moon by David Grann

In the 1920s, the richest people per capita in the world were members of the Osage Nation in Oklahoma. After oil was discovered beneath their land, the Osage rode in chauffeured automobiles, built mansions, and sent their children to study in Europe.

Then, one by one, the Osage began to be killed off. The family of an Osage woman, Mollie Burkhart, became a prime target. One of her relatives was shot. Another was poisoned. And it was just the beginning, as more and more Osage were dying under mysterious circumstances, and many of those who dared to investigate the killings were themselves murdered.

As the death toll rose, the newly created FBI took up the case, and the young director, J. Edgar Hoover, turned to a former Texas Ranger named Tom White to try to unravel the mystery. White put together an undercover team, including a Native American agent who infiltrated the region, and together with the Osage began to expose one of the most chilling conspiracies in American history.

4. Black on Both Sides: A Racial History of Trans by C. Riley Snorton

The story of Christine Jorgensen, America’s first prominent transsexual, famously narrated trans embodiment in the postwar era. Her celebrity, however, has obscured other mid-century trans narratives—ones lived by African Americans such as Lucy Hicks Anderson and James McHarris. Their erasure from trans history masks the profound ways race has figured prominently in the construction and representation of transgender subjects. In Black on Both Sides, C. Riley Snorton identifies multiple intersections between blackness and transness from the mid-nineteenth century to present-day anti-black and anti-trans legislation and violence.

Drawing on a deep and varied archive of materials—early sexological texts, fugitive slave narratives, Afro-modernist literature, sensationalist journalism, Hollywood films—Snorton attends to how slavery and the production of racialized gender provided the foundations for an understanding of gender as mutable. In tracing the twinned genealogies of blackness and transness, Snorton follows multiple trajectories, from the medical experiments conducted on enslaved black women by J. Marion Sims, the “father of American gynecology,” to the negation of blackness that makes transnormativity possible.

Revealing instances of personal sovereignty among blacks living in the antebellum North that were mapped in terms of “cross dressing” and canonical black literary works that express black men’s access to the “female within,” Black on Both Sides concludes with a reading of the fate of Phillip DeVine, who was murdered alongside Brandon Teena in 1993, a fact omitted from the film Boys Don’t Cry out of narrative convenience. Reconstructing these theoretical and historical trajectories furthers our imaginative capacities to conceive more livable black and trans worlds.

5. The Gay Revolution: The Story of the Struggle by Lillian Faderman

The sweeping story of the modern struggle for gay, lesbian, and trans rights–from the 1950s to the present–based on amazing interviews with politicians, military figures, legal activists, and members of the entire LGBT community who face these challenges every day.

The fight for gay, lesbian, and trans civil rights–the years of outrageous injustice, the early battles, the heart-breaking defeats, and the victories beyond the dreams of the gay rights pioneers–is the most important civil rights issue of the present day. Based on rigorous research and more than 150 interviews, The Gay Revolution tells this unfinished story not through dry facts but through dramatic accounts of passionate struggles, with all the sweep, depth, and intricacies only an award-winning activist, scholar, and novelist like Lillian Faderman can evoke.

The Gay Revolution begins in the 1950s, when law classified gays and lesbians as criminals, the psychiatric profession saw them as mentally ill, the churches saw them as sinners, and society victimized them with irrational hatred. Against this dark backdrop, a few brave people began to fight back, paving the way for the revolutionary changes of the 1960s and beyond. Faderman discusses the protests in the 1960s; the counter reaction of the 1970s and early eighties; the decimated but united community during the AIDS epidemic; and the current hurdles for the right to marriage equality.

In the words of the eyewitnesses who were there through the most critical events, The Gay Revolution paints a nuanced portrait of the LGBT civil rights movement. A defining account, this is the most complete and authoritative book of its kind.