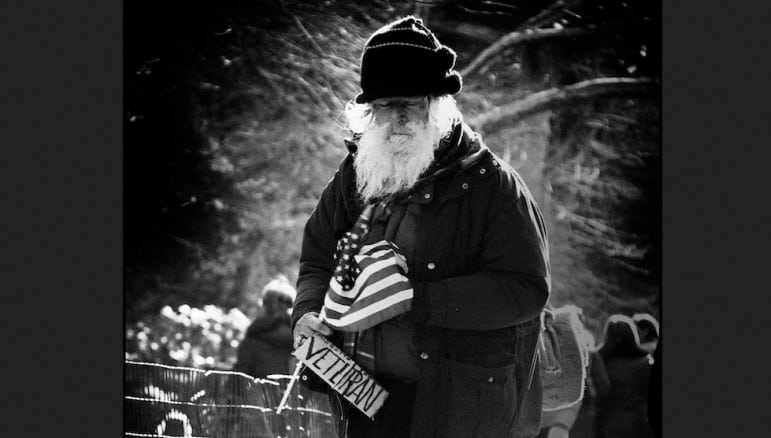 A homeless veteran seen in New York City in 2008.

This piece was originally published on CITYLIMITS.ORG
By Tori Lyon, Executive Director of Jericho Project

New York is poised to become the largest U.S. city to end veteran homelessness by the end of 2015, an incredible achievement for a city that in 2012 had the second largest population of homeless veterans in the country.

From 2011 to 2014, New York City achieved a 65 percent decrease in the number of veterans who experienced homelessness, from 4,677 to 1,645 – and by January 2015 saw a drop of another 50 percent to approximately 1,000.  With the support of Mayor Bill de Blasio and the work of the New York City Continuum of Care (CoC) Veterans Task Force, the City is on track to solve what not long ago seemed to be an intractable problem.

The CoC’s campaign to end veteran homelessness, known as Mission: Home, is an outstanding example of the success that can be achieved by galvanizing the knowledge and financial resources of passionate public and private organizations.  It shows how, even in one of the most expensive cities for housing in the world, homelessness can be significantly reduced for a target population of people.  This lends hope for the larger goal of shrinking the numbers of homeless adults and families overall.

The CoC Veterans Task Force is itself a network of government agencies such as the U.S. Department of Veterans Affairs and the Department of Homeless Services, as well as nonprofits such as Jericho Project, Volunteers of America, Services for the UnderServed (SUS) and HELP USA that are focused on the goal of ending veteran homelessness.  As a member of the Executive Council of the Task Force, we at Jericho are proud to be a part of this movement.

Our own Veterans Initiative began 10 years ago, when we first anticipated the potential for homelessness among young veterans returning from Iraq and later Afghanistan, as well as the large number of veterans from the Vietnam and post-Vietnam eras who were already homeless.  Guided by leading veterans in the government, military and private sector, we built two state-of-the-art Veterans Residences in the Bronx. There, 132 veterans hold keys to their own furnished studio apartments, where they have access to a community of their peers, computer and exercise rooms, and the ability to utilize customized services promoting employment, wellness and family reunification. Throughout the five boroughs, we added supportive housing apartments and services to veterans and their families. Today, of the 1,600 formerly homeless or at-risk New Yorkers we serve, approximately 550 are veterans.

Based on our experience, here is what we believe it will take to end veteran homelessness by year-end:

1) Resources, resources, resources:  Thanks to the commitment from City Hall and the federal government, we have seen an unprecedented concentration of support to help homeless and at-risk veterans attain affordable housing.

These include housing and counseling services such as the federally-funded HUD VASH Section 8 voucher program which helps veterans afford housing in their communities; New York City’s Living in Communities (LINC) rental assistance program which gives priority to veterans, and a “surge” of funding from the Veterans Administration to quickly re-house and prevent homelessness among veterans.

But the government cannot do this alone; the private sector has also stepped up. For example, the Robin Hood Foundation invested in crucial activities, such as providing staff to identify and house unsheltered veterans on the streets.  The result is that the number of unsheltered veterans has dropped by over 90 percent.

2) A Plan for Every Vet: As the number of homeless veterans has dropped to approximately 1,000, the CoC Veterans Task Force can tackle the specific needs of each veteran whether still in a shelter or unsheltered.

The City’s Task Force has pledged to have a housing plan for every identified veteran. In-depth assessments of each veteran will ensure that the right level of housing and support are provided. Some veterans will be able to identify housing with limited help, while others will need longer-term supportive housing. Regular case conferences among all the Task Force agencies ensure that no veteran will fall through the cracks.

Eradicating homelessness among veterans can be simply defined when the number of veterans who are homeless is less than the community’s ability to quickly place them into permanent housing.  By 2016 we should be able to provide any veteran who falls into homelessness with adequate housing.

3) Keep an Eye on the Long Term: Even as we come closer to achieving our goal, we must continue our programs that are designed to prevent veterans from experiencing homelessness in the first place.  Accordingly, Jericho’s Supportive Services for Veteran Families, which reached 256 families last year, helps veterans and their families secure housing and prevent future homelessness with financial assistance and employment counseling.

In addition to the CoC Veterans Task Force, exemplary organizations such as the National Alliance to End Homelessness and the U.S. Interagency Council on Homelessness provide leadership on a national level. Other communities across the country have effectively ended homelessness among veterans; New York City can do it, too.

As long as American troops defend our freedoms here and abroad, we owe them the chance to return to civilian life with dignity.  We believe this starts with a home and it is up to all of us to make good on that mission.